By Jen Martin — 5 years ago

We left New York with me feeling like maybe I had the whole bus thing finally down.  Traveling on the weekends, setting up camp, planning our next stop.  In other words, feeling good!  What could go wrong?

It was foggy when we left Cooperstown.  But we got a really early start and we were on our way!  A couple of hours later I even snapped a selfie for my mom and sent it to her, telling her we were happily bumping on down the road.

Then, in the words of Oaken from Frozen, we had a big summer blowout.

We heard a huge POP, and it felt like something bad had happened.  Billy looked back at me like, “What was that??” and I looked toward the back – the kids were already moving rapidly to the front of the bus.  They had obviously felt and heard it too.  Thankfully there was an exit ramp RIGHT where we were and Billy was able to instantly guide the bus, which was becoming more difficult to control by the second, to the side of the road.  We were on a pretty big interstate, so we told the kids to stay on the bus while we got out to investigate.

I had never seen anything like it.  It looked like Edward Scissorhands had a hayday with our back tires.  Yes, tires.  Both of the rear passenger side tires had blown.

Nothing was on fire, so that was good.  Also in the “good” column, my mom had given me some traffic triangles and flares before we left, and I had stuck them in a bay, hoping we’d never have to use them.

I called the Massachusetts police to let them know, and immediately wished I had not.  The officer declared we were in a bad spot and would need to be towed off.  Ack!  Not so fast, sir.  Towing buses is not easily done, and rarely is it done correctly, which is up on a flatbed.  Towing them any other way will result in serious damage unless the drive shaft is disconnected first, which of course is not something just anyone can do.  But he was all business, and not about to listen to my explanation.  I quickly assured him that my husband told me roadside assistance would be there in fifteen minutes.  (I didn’t know until after I got off the phone, but Billy fudged that detail – and he probably saved our bus by doing so.)

Oh if only it was fifteen minutes.  It was not.  It was hours.  And hours.

The kids were troopers.  There was a huge hill for them to hang out on, and when I felt brave enough, I tip toed onto the bus (it felt like it was going to fall over) and grabbed snacks and some board games.

Coach Net, which is the AAA of the RV world, was really wonderful.  They had quite the task, trying to track down two tires of this particular size.  Being a Sunday afternoon, options were very limited.  In the end only one tire could be located, and it was an hour and a half away.  There was talk again about towing, and taking off a front tire to put it on the back with the new tire, all of which made me very anxious.  But.  We had a spare.  Hiding behind the front bumper.  We knew because we had checked that spot for rust when we were bus shopping.  We may have had a spare, but we had no idea what kind of condition it was in, and we wouldn’t know until roadside assistance showed up and retrieved it.

We were so happy when the guy finally arrived.  He deemed the spare tire plenty good enough and set to work putting it, and the new tire, on.  After seven long hours of sitting and standing and pacing on the side of the interstate, we were ready to roll again.  We decided to cancel our spot in Rhode Island and find a place close by so that we could get the tire situation straightened out.  Obviously we would need at least three more new tires, and being in a bigger city would be good for that.  (We were in Springfield, MA) 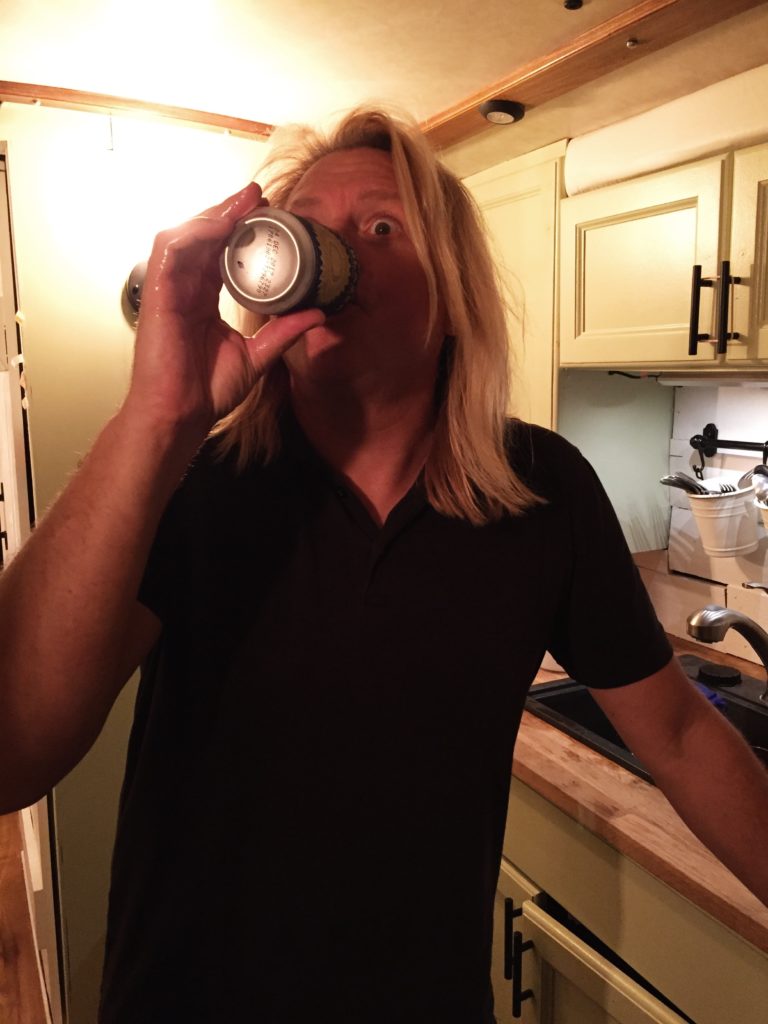 When I say it felt good to be parked in a campsite for the night, I really, really mean it.  We had so much to be thankful for.  Nobody was hurt.  The weather couldn’t have been more pleasant for sitting on the roadside.  The spare was there and usable and the bus didn’t have to be towed.  We were able to pull off the interstate right away which avoided a lot of possible damage to the bus rims and air lines.  The campsite in Rhode Island was kind enough to refund us since we couldn’t make it.  We went to bed shaken, but very, very grateful.

And on top of that, after months and months of having absolutely no idea of what to call our bus, we were finally able to name her.

World, meet Miss Happy.  We call her Mis’Hap for short.

Sign up via email and never miss a thing!

This error message is only visible to WordPress admins

Please go to the Instagram Feed settings page to create a feed.

Where we are now